The tomb of the late Dyn. XIX King Amenmesse is No. 10 in the Valley of the Kings.  It was among the few tombs accessible when Richard Pococke conducted his explorations in the late 18th century.  Later, Jean Champollion and Richard Lepsius copied a few of the scenes, and in 1883 Eugene Lefebure made hand copies of the remaining accessible decoration.  The poor state of the decoration and the mass of rubble introduced over the years by rain waters tended to hinder any large-scale exploration, though some 19th century explorers probed several areas within the tomb and there was some clearance of the entry area and first chambers by Edward Ayrton nearly a century ago.

Many uncertainties regarding the tomb’s construction, decoration and use, plus many unresolved questions regarding Amenmesse, were all factors that made a complete clearance and investigation desirable.

A proposal to clear and study KV-10 was made in 1992 and an examination was begun on the very last day of 1992.  Excavations began in the summer of 1993 and have been conducted every year since, except for 2002.  In addition, there have been four winter study seasons.

It was found that the bulk of the washed in rubble in the upper corridors had been introduced into the tomb during the last two centuries.  The rubble in the corridors often reached to near the ceilings (3+ meters).  Whereas the floor debris contained primarily pharaonic materials, there were no distinctly pharaonic levels except for the bottom layers in the lower rooms.

At this writing (June 2002) almost all of the tomb’s interior has been cleared, except for the doorway into the lower chambers.  Outside the tomb, a search for foundation deposits in 2001 led to the discovery of a workmen’s hut complex (one plus rooms) just 5 meters from the original top step of the tomb’s entrance ramp/stairway.

From the façade back to the pillared hall, the tomb had been decorated for Amenmesse.  Much of this had been removed or covered up. Raised relief near the entrance had been carefully cut away. Even figures of ReHarakhty and Maat were removed.  The remainder of the Amenmesse decoration was in sunk relief, though there are now only scant scattered traces remaining.  A few cartouches of the king are among the best preserved texts. Some stars painted onto the blue ceilings remain in parts of the pillared hall and corridors.

The rubble washed into KV-10 during the past two centuries contained a mix of artifacts—pharaonic, Roman and Late Roman and also more recent articles left by explorers and travelers.

More pertinent to the early history of the tomb, a chunk of red granite (sarcophagus lid fragment) bearing the name of Takhat was found in the well chamber in 1995.  In 1998, many fragments of this same lid were found in the vaulted chamber (G) just beyond the pillared hall.  No trace of the sarcophagus box has come to light.  The lid bears strong resemblance to those of some of Ramses II’s wives and surely dates to that era.  The original name on the lid was of a king’s daughter, King’s Wife (hmt nswt) named Anketemheb.

Some limestone canopic fragments bearing the name of Takhat were found in the lower rooms.  They bore the titles King’s Daughter and King’s Great Wife (hmt nswt wrt).  On the canopic fragments, the name and titles had been added over now thoroughly erased texts.  The set is incomplete, only one damaged lid and parts of two vases are extant.

Small curls, mostly blue fayence, were found scattered throughout the tomb.  Over 240 have been recovered and it is believed that they were part of the decoration for the Takhat coffins.  Strewn about the floors in the lower rooms were many sherds of marl clay storage jars and amphorae, most likely part of the funerary equipment.  And finally, a badly preserved skull and part of a mandible were found on the floor near the back of the tomb--  very likely what remains of Takhat.

Other items of interest include over 70 fragments of blue fayence ushebties of Sety I. Many were found near the floor in D corridor, well buried under several meters of rubble.  Those found in this circumstance were surely introduced into KV-10 long before Belzoni’s opening of Sety’s tomb, KV-17.

Most significant for the early history of the tomb, there was nothing discovered which could be attributed to the burial equipment of either Amenmesse or Baketwerel.

The many cracks and fissures in the hillside made it necessary for the builders of KV-10 to carry out many repairs during their construction of the tomb.  Many have stood up rather well to the ravages of time and floods.  Even a major crack through the ceiling in the pillared hall was repaired in ancient times, though two large slabs did eventually fall about 150 years ago.

The pillars were in poor condition.  One was rebuilt and two others required extensive consolidation.  The ceilings in the lower chambers were greatly cracked due to occasional accumulations of rainwaters.  During our clearance, minor repairs were made whenever necessary.

The tomb texts named Amenmesse, Baketwerel and Takhat, but the evidence suggests that only Takhat received burial in KV-10.  Very likely the tomb was initiated for Amenmesse, but it was never fully hewn.  Various historical reconstructions suggests that Amenmesse’s reign was cut short (death or exile?) by Sety II.

With the deletion of much of the Amenmesse decoration, new decoration was added:  the pillared hall adapted for Queen Baketwerel and the well room for the King’s Mother Takhat.  It is also a possibility that the lower rooms (including the vaulted chamber) were completed to hold these intended occupants.  For whatever reasons, only Takhat appears to have been interred in KV-10, the vaulted chamber (G) serving as the burial chamber.  Burial goods included the usurped sarcophagus lid (and presumably the box as well), usurped canopic equipment, coffins (now lost) decorated with the fayence curls and an array of storage jars.  No ushebty figurines were found.  The tomb was plundered soon after the interment.  The body was broken up, and ultimately the sarcophagus lid was likewise smashed and the box removed.

Anketemheb’s sarcophagus lid was used for Takhat.  Anketemheb may be the Ramses II daughter of wife on the Luxor Temple list of royal princesses (cf. KRI II, 916) where the name is only preserved as “[ … ]-heb.”

For the present, we are assuming that the King’s Mother Takhat is the same person as the princess and King’s Great Wife Takhat associated with the sarcophagus lid and canopics.  The time span between the cessation of the work for Amenmesse in KV-10 and the introduction of the new decorations for Takhat and Baketwerel has not yet been determined, though it must fall between the last years of Dyn. XIX and beginning of Dyn. XX.

The work remaining on Kv-10 includes the completion of the interior clearance (aims for 2003), the resumption of the foundation deposits outside the tomb and then dealing with recording the poorly preserved decorations.

CENTRE OF THE KING’S VALLEY

This composite map was created by combining elements from an old map by HOWARD CARTER (MSS I, G 52), the THEBAN MAPPING PROJECT ATLAS (sheet 5/70) and our own maps of the huts near KV-10. The key tomb entrances and the necropolis workmen’s huts are indicated, illustrating the various clusters of these known structures of the tomb-builders. Not included are some walls uncovered during the ARCE KV PROJECT (E. Brock) work to the east of the KV-10 East Huts.

Though based upon surveyed materials, the map presented here is on a rather small scale and the use of various Xerox reductions in its creation has led no doubt to some minor distortions. With this in mind, the map is intended to serve as a rough sketch of the huts in the center area of the King’s Valley.

The northeast area of KV-10’s East Huts and only ca. 6+ metres from the huts found (now covered) by Carter in the central part of the KV. 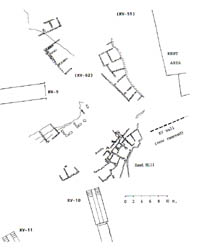