Summaries of the Excavation Season in KV-10
The large size of the tomb and the extensive buildup of rubble made it necessary to carry
out the work in relatively small stages.  From 1993-1997 the work was carried out during
the summer months, but from 1998 through 2001 we switched to late winter seasons to
avoid the excessive summer heat.
The entrance ramp (Area A) was essentially clear when we began our work, but there was
still light debris covering the solid limestone into which the combination steps and ramp
were cut.  The first interior chamber (room B) was cleared to the floor only in the first part
of the chamber--- beyond that, none of the original floor of the tomb was exposed.  A short
distance into chamber C, the rubble reached nearly to the ceiling and was thus ca. 3m thick.
This front part of the tomb had most recently been cleared by Edward Ayrton
(for Theodore Davis) in 1907.
With rubble reaching to near the ceiling in C and D chambers, the only immediate access to
the pillared hall was through a hole or breech connecting Ramses III’s tomb (KV-11) with
the unfinished side chamber (Fa) in KV-10.  KV-11 was originally hewn for Ramses II’s
father, Sethnakht.  The tomb was abandoned after hitting the KV-10 side chamber.  Ramses
III later adapted KV-11 for his own use.  The hole is now covered by a grate.
1992-1993
This was a the introductory exploration season, though we did carry out a small sondage in
chamber B.

1993
The first full season of excavation.  B and C chambers were fully cleared and an access path
was cut through the surface debris on the right side of the tomb in D chamber.  Varied mixture
of ancient and relatively modern items found in the washed-in debris.  Floor debris contained
primarily pharaonic wares, but late Roman era sherds were always nearby, in lesser quantities.
Early indication that the floors of these upper corridors had only relatively light debris until
Roman times.
1994
Pathway cut through the well chamber (room E) and along the right side of the pillared hall,
then into the lower chambers to the back of room H. No evidence of a doorway found at
the back of H, indicating the tomb construction ceased at that point.  A sondage at the
back of H’s right side yielded many sherds of storage jars and also some limestone canopic
fragments.  One of the latter bore a cartouche of Takhat.  This was our first evidence of an
object bearing a name of one of the three persons mentioned on the tomb walls.

1995
Excavated fully rooms D and E, and began clearance of the side chamber Fa.  No well had
been cut into room E.  A fragment of a red granite sarcophagus lid bearing the name of
Takhat added further evidence of a possible burial for her.  Of interest were many fragments
of blue-glazed fayence funerary figurines (ushebties) of Sety I (Dynasty XIX).  Only one
piece had the head and upper torso, all of the remaining fragments were usually of the trunk
or foot end.  As many of these ushebties were found virtually at the floor level, they had
clearly been introduced into KV-10 long before Belzoni’s discovery of Sety I’s tomb,
KV-17.

1996
Side chamber Fa was cleared and much work was done in the pillared hall (room F).
The top three steps of the descent were cleared, revealing a combination of steps flanking
a central ramp, comparable to the entry ramp in Area A.  The steps were covered over to
protect them.  Continuation of mixed artifacts in the rubble.  More sandy levels formed
here as water sat from time to time after flooding.
1997
Much of chamber F cleared this season, except around the most badly damaged pillars.
Some probes in F pit and G doorway and some surface levels removed form chamber G.
Pillar C was rebuilt.  Evidence that nineteenth century explorers probed around in the
southeastern sector of the hall.

The 2005 season’s work was carried out from 31 January through 12 March, with some refilling of our excavation pit taking place in the followings weeks. The site exterior was restored and the tomb was resealed on 7 April 2005.

To the east of East Huts Room Eight, two more rooms were found. Room Nine was a sizeable chamber and had a small antechamber in front. While earlier explorers had basically left the floors of the other rooms of the East Huts intact, we found this east end to have been fully probed about a century ago, presumably by Theo Davis (based in part on a Chablis bottle found in the fill and a piece of New York Times newsprint dated “5 February 1907”). Both chambers’ floors had been cut through as the earlier probe went below the foundations and down to the gebel two metres below the floor level.

The widespread disturbance noted at this east end of the huts area was refilled with rubble, leaving no reliable archaeological context for the finds. Aside from sherds of various periods, Room Nine contained a decorated chunk (ca. 34 cm wide) of the sarcophagus box of Ramses IV and also an ostracon which mentioned the name of Ramses II. A late Roman amphora fragment next to the Ramses II ostracon illustrates well the mixed nature of the refill debris. The smaller Room Ten, had a tiny mud seal fragment with a cartouche of Thutmoses III.

In the center section of our pit, essentially the north limit of our probe, only one wall (dividing wall between Rooms Eight and Nine) shows a continuation to the north under unexcavated rubble nearer the center of the King’s Valley (KV). This wall could run close to or even join remains of huts found by Carter in the center of the KV. What appeared to be possibly continuing walls in the sector faded away. The area north of the main body of the East Huts have been raised with rock chip deposits, additional “floors” developed from usage and more rock slab deposits raised the area, no doubt to enlarge and level off the work space for the tomb builders.

As the walls dwindled, so did the quality and quantity of the finds. Nearing the edge of the huts and getting farther into the tourist paths of the KV, it was determined to conclude the outward extension of our probe.

A report on the 2005 Season was submitted for publication in the Annales du service des l’antiquities de l’ Egypte in June 2005 (now “in press”). 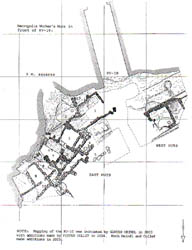 Approvals for the resumption of the project were earlier this autumn. It is hoped to get the next season underway late in December 2005 and continue the work well into 2006. As we are still in the planning stage, a tentative cut-off date has yet to be established. There are tasks to perform outside KV-10, and if time and funds permit, we will turn our attention to clearing the descent through the pillared hall—the area in Amenmesse’s tomb which is cluttered with rubble.

NOTE: The KV-10 website will be undergoing some revisions and additions, but with the next season to get underway in the near future, some new materials (and some older but still relevant items) will not be introduced until after the 2006 season.